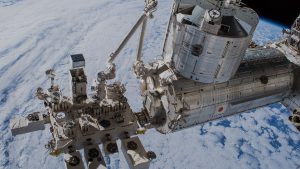 Specifically, the company plans to develop small optical communications devices to connect micro satellites in LEO (Low Earth Orbit) via the use of laser beams.

By using optical communications, it aims to achieve high-speed comms with small devices that are physically difficult to achieve with conventional radio communications, with requirements for a large antenna and high power output.

“Additionally, the need for frequency licenses for radio waves and the requirement for lower power consumption of communication equipment needed by smaller satellites, like micro satellites, are also issues to be addressed,” Kyohei Iwamoto added.

The new corporate entity will be based in San Mateo, California.

The system was was launched aboard H-IIB Launch Vehicle No. 8, from the JAXA Tanegashima Space Center in Japan, and it was installed in the Japanese Experiment Module “Kibo” of the International Space Station (ISS).

According to Sony, it established a bidirectional laser communications link with a space optical communication ground station of the Japanese National Institute of Information and Communications Technology (NICT), and successfully transmitted high-definition image data via Ethernet protocols.

In 2021, the experimental device successfully established optical downlinks from space to a commercial optical ground station of Kongsberg Satellite Services in Greece.

The technology was jointly developed by Sony Computer Science Laboratories (Sony CSL) and the Japan Aerospace Exploration Agency (JAXA) and featured Sony’s optical disk technology such as was used in household CD players.