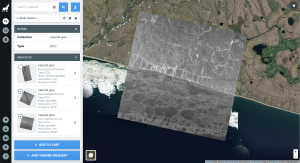 Capella says it will use the funding to expand its analytics and integrate “intelligent data offerings” within its Capella Console. For example, recently Capella launched three new analytics capabilities for Vessel Detection, Change Detection and Global Change Monitoring.

It also intends to support launching its next generation of satellites, providing improved imaging capabilities for the San Francisco-based company.

“This new funding is a testament to the market demand for quick delivery of high-quality commercial SAR data and analytics, and we’re seeing it firsthand at Capella,” said CEO Payam Banazadeh. “I’m excited for our next phase of growth and the opportunity to bring even more innovation and accessibility to the earth observation industry.”

In terms of financial performance, the company reports it has doubled revenue in the last year and expects to triple revenues over the next twelve months.

It can be described as a type of active data collection, where a sensor records the amount of energy that is reflected back to it, making it responsive to surface characteristics, such as building structures and atmosphere moisture.

Back in January, Capella Space was among the first five commercial operators of radar satellites to be chosen to supply their data to the U.S. government.

The aim is to ensure the U.S. government has access to the best commercial remote sensing capabilities and data, as well as its own sources, for geo-intelligence purposes.