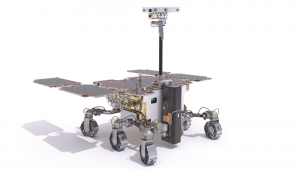 The technology – the rover is currently in an ultra-clean room at the Thales Alenia Space premises in Turin, along with its Mars-bound companion, the Kazachok landing platform – has completed a series of successful tests, including the rover driving off its landing platform (see below), reports the agency. All its instruments are now approved for flight, with some “minor tuning” left to complete this month.

Sue Horne, Head of Space Exploration at the UK Space Agency, noted how the ExoMars Rosalind Franklin Rover showcases work of the UK’s space sector and its search for signs of life on Mars will inspire future generations of scientists and engineers.

“It’s very exciting to see this flagship mission pass the latest tests and see the fruition of many years’ hard work as we look forward to the launch later this year,” said Horne.

The rover, for example, was built in Stevenage by Airbus, and the University College London Mullard Space Science Laboratory led on a key instrument known as the PanCam, which is a high-resolution 3D camera for studying the terrain and detecting previous signs of life.

The University of Leicester, Teledyne e2v and STFC RAL Space also worked on the Raman Spectrometer, which will use laser light to identify particular minerals and organic compounds and search for life.

Note that it was actually Rosalind’s “twin on Earth”, known as Amalia, that successfully left the platform in the Mars terrain simulator at the ALTEC premises in Turin.

Apparently, while the driving during these exercises takes about 15 minutes, the whole egress (the landing platform has two exit ramps) is a long operation that will last a few martian days, says ESA.

The test model borrows its name from the astrophysicist Professor Amalia Ercoli Finzi who was the first woman to graduate in aeronautical engineering in Italy, and who strongly pushed for the development of the ExoMars drill 20 years ago.

Amalia has also demonstrated drilling soil samples down to 1.7 metres and operate all the instruments while sending scientific data to the Rover Operations Control Centre, which is the operational hub that will orchestrate the roaming of the European-built rover on Mars.

Following a final review in April, all the components of the spacecraft – rover, descent module, landing platform and carrier – will move to the launch site in Baikonur, Kazakhstan, to prepare for lift-off.”

The ESA-Roscosmos ExoMars mission is scheduled for launch in September 2022.

“The rover is ready, and together with the recent drop test success for the parachutes, we are positive to be in time for the September launch date.”