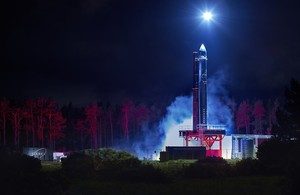 Specifically, the first integration of a full scale Orbex prototype launch vehicle on a launch pad is now complete.

With headquarters and production facilities in Forres, North-East Scotland, and design facilities in Denmark, Orbex will enter a period of integrated testing, allowing dress rehearsals of rocket launches and the development and optimisation of launch procedures.

It started construction of a Launch Platform in Scotland near Kinloss in December last year, which is the first orbital space launchpad to be built in the UK for more than half a century.

Although Orbex will eventually operate its launches from Space Hub Sutherland, on the A’ Mhòine peninsula, the test launch platform at Kinloss is intended to allow for full ‘dress rehearsals’ of launch procedures. You can read more about Space Hub Sutherland here.

The company has also committed to being carbon-neutral, both in its construction and operation.

“It is also fantastic to see Moray-based Orbex creating more high-quality jobs, demonstrating the value of our thriving space sector to support emerging clusters of innovation to help level up the whole of the UK.”

At the centre of operations will be Orbex Prime, a 19-metre long, two-stage rocket that is powered by seven engines. It is being designed and manufactured in the UK and Denmark, and the company is hoping for a first launch fbefore the end of 2022.

Orbex Prime is also powered by a renewable bio-fuel, bio-propane, supplied by Calor UK. According to the company, this fuel allows the rocket to reduce carbon emissions significantly compared to other similarly-sized rockets being developed elsewhere. It cites a study by the University of Exeter indicating a launch of the Orbex Prime rocket will produce 96 per cent lower carbon emissions than comparable space launch systems using fossil fuels.

Prime is also a re-usable rocket which has been engineered to leave zero debris on Earth and in orbit.

“This is a major milestone for Orbex and highlights just how far along our development path we now are,” said Chris Larmour, the CEO of Orbex. “From the outside, it might look like an ordinary rocket, but on the inside, Prime is unlike anything else.”

“To deliver the performance and environmental sustainability we wanted from a 21st century rocket we had to innovate in a wide number of areas – low-carbon fuels, fully 3D-printed rocket engines, very lightweight fuel tanks, and a novel, low-mass reusability technology.”

The UK Space Agency supported the development of Orbex’s Prime rocket with £5.5 million of funding, as part of the government’s plans to enable small satellite launch from UK spaceports.

Since 2015, Orbex has raised more than £38m in public and private funding. In December 2020, for example, it secured $24 million in a funding round led by BGF, a UK investment company, and Octopus Ventures, one of the largest VCs in Europe.