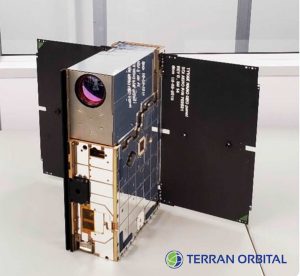 To be operated by Lockheed Martin, which won the development contact from NASA, the nano-satellite dubbed LunIR is part of the Artemis I mission and its lunar flyby is planned to gather data about the Moon.

Breaking down the responsibilities, Tyvak will manage the spacecraft’s mission operations by using ground station communication services provided by KSAT, which will be using its ground stations in Punta Arenas in Chile, Svalbard in the Norwegian Arctic archipelago and Troll, the Norwegian research station in Antarctica.

The LunIR craft itself is a 6U CubeSat (measuring 10 x 20 x 30 cm, with deployable solar panel wings) designed to ride to space inside NASA’s Space Launch System (SLS) rocket on the Artemis I mission. It will be deployed from the rocket’s Orion stage adapter and then perform the flyby of the Moon to observe the lunar surface and characterise material composition, thermal signatures, and to identify future possible landing sites.

It will host a miniature high-temperature Mid-Wave InfraRed (MWIR) sensor – which can map the moon both day and night – and use a novel micro-cryocooler developed by Lockheed Martin.

After the initial lunar flyby, the LunIR spacecraft will continue collecting data related to long-duration exploration missions to Mars and beyond. Data collected, says KSAT, will help answer questions about the feasibility of deep space human travel.

“Supporting this lunar cubesat mission for Tyvak and prime contractor Lockheed Martin is something we are genuinely excited about,” said KSAT’s EVP of Strategy & Technology, Arnulf Kjeldsen. “Exploratory missions going to the Moon and beyond are challenging and we look forward to supporting LunIR on our network. We are continuously expanding our global network to meet the growing demand as more lunar missions are coming to fruition through the Artemis program and NASA´s Commercial Lunar Payload Services (CLPS) contracts.”

Terran Orbital – of which Tyvak Nano-Satellite Systems is a wholly-owned subsidiary – commented as follows.

“Terran Orbital is thrilled to provide ground network support for the LunIR mission,” said Co-Founder and CEO Marc Bell. “Small satellites like LunIR are the most cost-effective way to learn more about the Moon – and what challenges and opportunities it could pose for human habitation.”

The agreement was announced at the recent SmallSat Symposium in Mountain View, California.