Helmet liners are made of foam that holds heat well. Human bodies use the head to radiate excess heat during exercise. Only a flow of air over the head can carry that heat out of the helmet, so ventilation becomes critical in hot weather, and is needed even in cold weather to carry moisture away.

Back in the 1980’s a British university study found that the larger the front vents, the cooler the helmet. More recent research indicates that for optimal cooling the air also needs to be channeled to the exits, so the interior channels are important to taking in the most air possible through the front vents. In some designs air may even prematurely exit through the side or top vents before performing its cooling role, and researchers have covered some vents and actually improved cooling performance. Some air flows under the edges of the helmet if you have not sealed the edge against your head with fit pads. In short, the interaction of the vents and channels in directing the best cooling flow over your head is not simple and is probably not optimal in many helmets.

One of the factors complicating helmet research is that even very small changes in the angle of the helmet to the airflow have a big effect on cooling. The best recent study on this subject used only 0 degrees and 30 degrees from level as the test angles, but our understanding is that the effects can be pronounced with much smaller angles.
Another factor that varies a lot is hair. It acts as an insulator, and the more of it you have, the better it insulates and the less cooling you get. Length, thickness, stiffness, curliness and bald spots all have an effect. And the hair that hangs outside the helmet can keep cooling air from your face or neck as well. Women already understand that. Men will too when fashion swings back to long hair in the US.

There are now many “hyper-ventilated” helmets on the market following in the footsteps of the mid-90’s Giro Helios (more vent than helmet). You can find them in any bike store, and even in the discount stores at the malls. Each has a “cutting edge technology” claim about the effectiveness of their vents. Some even claim to have models with larger top vents for optimal cooling for slower-moving mountain bikers. The complexity of airflow dynamics inside a helmet would indicate that the best test is riding in the helmet on a hot day.
Most riders actually do not really need extreme vents. The ordinary vents in cheaper helmets are more than adequate for most people, and leave more foam in between to cushion your impact. A few people are “hot heads” and do need that much ventilation, but they already know who they are.
Helmets with huge vents are always more expensive. While that may be due to marketing it is also affected by much higher production costs when the manufacturer has to add internal bracing, dense foam and higher quality shell materials to provide adquate impact protection with the foam remaining between the vents.

HOW TO IMPROVE YOUR COOLING

Cooling can be enhanced on almost any helmet by careful placement of fitting pads to permit air channels around the front and sides. Many riders find that they need a sweat band to keep their eyes clear, and that the foam sweatbands in the front of most helmets do not provide adequate sweat control. That forces you to use a separate cloth sweatband that wraps entirely around the head. The cloth keeps cooling air from reaching your head. (The advantage is that in winter you just swap the sweatband for an ear band without changing the fit.) If you can get along without a sweatband, your head will be cooler. Some may need only a half sweatband with an elastic piece around the back. So pay some attention to the front pad of the helmet and try to find one that is adequate for your level of sweating. 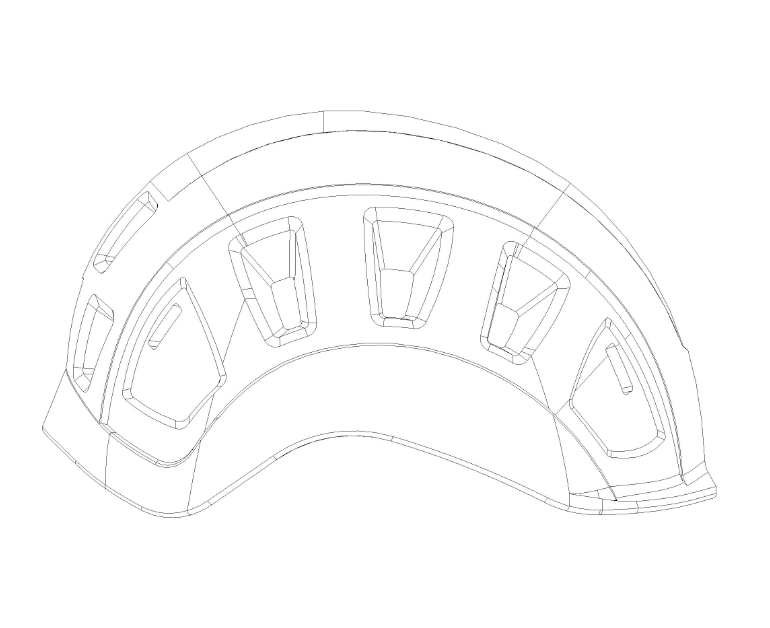 Beyond that, any cooling improvement will involve a compromise. You can put thick pads under the top of the helmet to hold it up and off your head so air can circulate. We do not recommend that, since raising the helmet up would also raise the bottom edge up, and that would decrease the coverage area for impact protection. There are enough hits below the edge of the helmet as it is, and you want to avoid contributing to that injury category. We just remove the top pad entirely to fit a helmet, and that gives you the best coverage the helmet can provide. You can also use a helmet that is larger than your actual size to provide an air space around the head. We do not recommend that either, since it increases the outside diameter and could contribute to rotational injury if the outside snags in a crash. Sometimes a helmet comes with fit pads that cover a vent, so check yours to be sure your vents are all clear.
Air channels can be left in fitting foam around the edges of a helmet to encourage air flow. You can leave gaps between pads as long as the stability of the helmet on your head is not affected, since the fitting foam is not part of the impact protection and only affects comfort and stability. Several early bike helmets had no vents, and relied on the airflow around the edges for cooling. They were hot, despite channels in the inner surface of the helmet or a harness arrangement to hold the helmet away from the head. Vents are essential for most riders in most climates. But do not overlook the role of air flow at the edges.
Helmet manufacturer who tested a number of helmets in a wind tunnel at 18 mph against a bare metal headform in the same tunnel concluded that virtually any helmet provided better cooling than a bare head. A scientific journal article reached the same conclusion, but Dr. Paul Brühwiler’s more recent scientific article cited below disputes that finding. And he was testing helmets from the European market, generally thinner, better ventilated and less protective than helmets sold in the US.

No bicycle helmet standard specifies minimal areas for vents or has a test for minimal cooling. Testing is difficult and quirky. The assumption is that the consumer can judge cooling without any help from a lab test.
Several attempts have been made to measure comparative cooling. In the 1980’s Bicycling magazine used a dummy head called “Cool Head Luke” to measure cooling. The metal headform was heated to a uniform temperature, then spritzed with water, followed by mounting a helmet on it and placing it before a fan. Thermocouples on the headform measured how well the heat from the headform was dissipated.
More recently, Andrew Ellis constructed a similar rig for his PhD research in Australia, using an aluminum headform in a wind tunnel instrumented with 12 thermocouples. The headform was heated by circulating hot oil through it until the thermocouples registered 20 degrees above the ambient temperature. Then a helmet was placed on the headform and the wind turned on at 42 kilometers per hour. The data were compared with performance of a bare headform. Excellent ratings included the Adura Equipe, Briko Twinner, Giro Boreas, Headstart Alessi, Met Parabellum, and four models from Rosebank: the Twister, Vector, Predator and Volante. These models are mostly available in the Australian market except for the Briko and Giro.
In 2004 we heard from Dr. Paul Brühwiler of Switerland, who has constructed a new heated headform with computer controlled perspiration. Dr. Brühwiler has at least one article on his Web site on comparing helmet cooling performance, including the sensitivity of helmet cooling to the angle of the helmet in the wind stream. The abstract of his article on the subject indicates that helmets he tested cool from 60 to 90 percent as well as a bare head, and that tilting the helmet forward 30 degrees usually improved cooling.
Quirks arise in the testing from several factors. The critical one is probably the angle of the helmet and head in relation to the cooling airflow. Tilting the headform just a degree or two can make a very large difference in the results. There is no hair on most of the headforms, so what is being measured is the effect of the cooling air on the helmet and a bald head. Adding hair introduces another variable that may not be uniform from one lab to the next. The sizing of the helmet is critical. Since most of the tests to date have used only one headform, a helmet that fits it too tightly or very loosely will have less or more air flowing around it. Placement of the fit pads adds another variable that is difficult to control from one lab to another. Air channels in the brow pads will result in more air flow over the head than fit pads that extend all the way around the head without gaps. A “one size fits all” ring fit system may permit more or less air to pass depending on the fit of the helmet on the headform. The fit ring cuts off airflow and may make the face hotter. Ambient temperature and humidity are potential variables as well. Most of the headforms are used dry, but Bicycling used a water spray to simulate the cooling effect of sweat. That introduces another variable in the testing that is very difficult to specify and apply with precision, and it has not usually been used by others.

In short, the test methods developed to date leave a lot to be desired. That does not mean that precise methods that are repeatable between labs with a small margin of error are not attainable, but nobody has worked up a test method yet with that in mind. As a result, it would be very difficult to add this type of test to a bicycle helmet standard at the present state of development. It would, however, be possible to conduct tests for consumer magazines where the only outcome is ranking the helmets by ventilation.