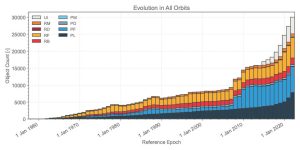 Specifically, while technology improves our ability to spot and track smaller fragments of space debris, not enough satellites are removed from heavily congested low-Earth orbits (LEO) at the end of their lives.

The image above represents the number of tracked pieces of space debris. The ESA says more than 30,000 pieces of such space debris have been recorded and are regularly tracked by space surveillance networks.

Based on its models, however, ESA states the true number of objects larger than 1cm in size is likely to be over one million.

The effects of ever-smaller satellites, and larger constellations, are also noted. The agency says the last two years have seen an enormous increase in the number of commercial satellites launched to near-Earth space, with the vast majority being smaller satellites weighing between 100 – 1000 kg.

This itself poses a challenge to long-term sustainability, whatever the benefits their communications services may provide.

One positive change, however, is that more satellites are sharing their ride into space, i.e. multiple craft in a rocket’s payload. 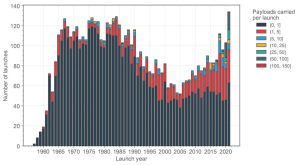 According to ESA, see right, 2021 saw a record number of rocket rockets carrying multiple satellites into orbit at the same time. This reduces the launch cost per satellite, but can make it more difficult for surveillance networks to spot and keep track of individual objects.

“The increase in launch traffic and the long-lasting nature of space debris in low-Earth orbit is causing a significant number of close encounters, known as ‘conjunctions’, between active satellites and other objects in heavily congested orbits.”

“At lower altitudes, satellites more frequently encounter small satellites and constellations. At higher altitudes, they more often encounter debris objects left over from a small number of famous and significant fragmentation events – visible in this plot in shades of blue.” 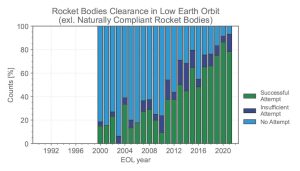 One positive note recorded is that many rocket bodies launched today, to deliver satellites, are disposed of sustainably, whether burned up using a “controlled reentry” into Earth’s atmosphere or placed in orbits that naturally decay within 25 years.

“Rocket bodies are the largest objects we send to space and their removal from busy orbital highways reduces the chance they explode or fragment into many pieces of dangerous debris.”

“An increasing percentage of disposal attempts are successful, but too many are left drifting in important orbits with no attempt made to remove them. A successful removal rate of at least 90% for all types of space object is required to limit the growth rate of space debris, before we can start cleaning it up.”

You can read the 2022 Space Debris Environment Report in full here.

The report has bene produced annually since 2016 by the ESA’s Space Debris Office.