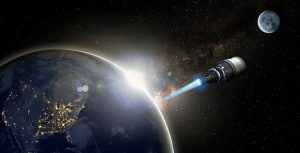 Specifically, DARPA is after proposals for Phases 2 and 3 of its DRACO (Demonstration Rocket for Agile Cislunar Operations) programme, which is for the design, development, fabrication, and assembly of a nuclear thermal rocket engine. The goal is to execute an in-space flight demonstration of nuclear thermal propulsion in 2026.

The R&D agency, which is responsible for the development of emerging technologies for use by the U.S. military, says the developments are to “enable time-critical missions over vast distances in cislunar space”.

You can see the official solicitation here.

The goal of DRACO is to demonstrate a nuclear thermal propulsion (NTP) system on orbit.

According to the agency, NTP uses a nuclear reactor to heat propellant to extreme temperatures before expelling the hot propellant through a nozzle to produce thrust. Compared to conventional space propulsion technologies, NTP offers a high thrust-to-weight ratio around 10,000 times greater than electric propulsion and two-to-five times greater specific impulse (i.e. propellant efficiency) than chemical propulsion.