When it comes to publishing their mobile games, Western developers prioritize two main app stores: Apple AppStore and Google Play Store. Why? They are familiar platforms with low barriers to entry. Most developers either don’t know the broader global opportunities, or think it is too difficult to publish games and make money on other platforms.

The upshot of this is that there are at least 1.5 million games available to users across the AppStore and Google Play Store. Realistically, we’ve reached a saturation point that means discoverability for indies is becoming almost impossible. Of course, for developers with longstanding reputations and massive marketing budgets this is far less of an issue, which is why the vast majority of revenue on the two main app stores flows to a small variety of the games.

If that’s not bad enough, privacy changes introduced from iOS14 onwards have drastically reduced ad revenue for games in the Apple ecosystem. While some advertisers are naturally doubling down on the Google Play Store, many are looking to relatively untapped alternative Android ecosystems. For game developers and publishers, this creates an unprecedented opportunity.

The Key to More Revenue: Diverse Distribution of Content 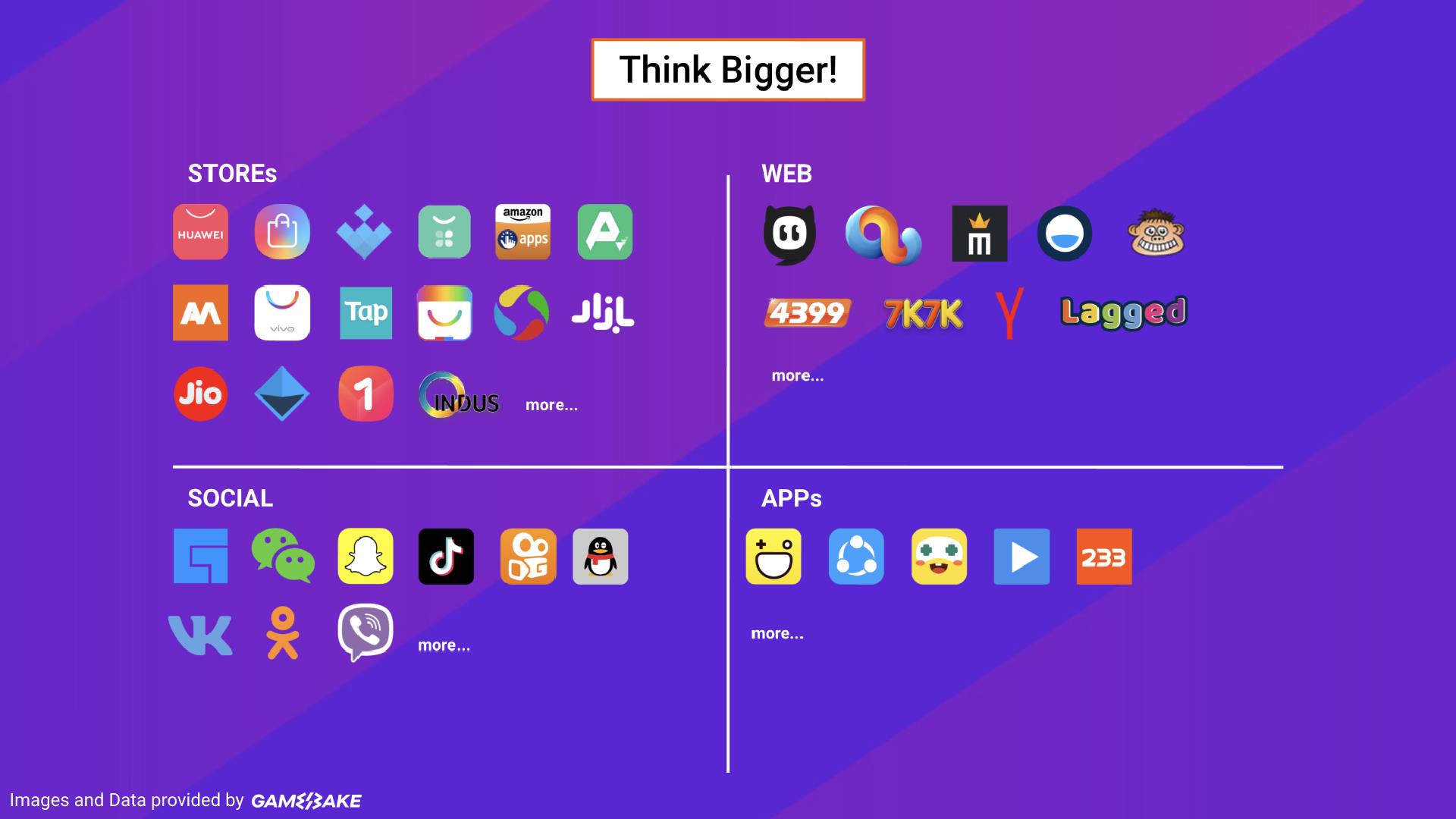 When it comes to monetising mobile games, it’s not just about Western audiences — far from it, actually. China alone makes up 40% of the global app revenue on mobile devices, while Asia-Pacific as a whole generates half of global app revenue ($84 billion). To put this into context, it’s double what the North American market generates. The Latin American (LATAM) market is quite well-known, but game developers will also increasingly hear the acronym MENA (Middle East and North Africa) as opportunities grow in that region.

Economic and geopolitical realities are an unavoidable quirk of publishing video games. While the two major app stores of course permeate global markets to varying degrees, alternative Android stores such as Huawei AppGallery or the JIO App Store are often the key access point to massive global audiences in markets like China and India. Google Play isn’t available in China, meaning any game published exclusively on that platform is automatically cutting itself off from 40% of global app revenue. And iOS, often considered the premium ecosystem, isn’t always a safe bet either. Very few people use Apple phones in India, for example, a country with 420 million online casual gamers — 94% of whom play on mobile.

Awareness of the opportunity of alternative Android stores to reach and monetise non-Western audiences is growing quickly. But a little-known fact is that they can be used to diversify and boost revenues in the typical core markets too. For example, while Huawei AppGallery is best known for its huge APAC user base, it also has well over 70 million MAUs in Europe. That’s a large and lucrative audience that isn’t accessible on Google Play (which isn’t enabled on Huawei devices). The comparative lack of mobile game flooding AppGallery  and similar stores makes it much easier for developers to advertise their games; and means these platforms are actively seeking great gaming content for their users.

The lesson here is that, while regional preferences in terms of gaming content and economics and geopolitics affect game distribution too, great content has universal appeal. Chinese-made games like Genshin Impact and AFK Arena are at the top of the charts in Western markets. On the flip side, many mobile games from Western developers are popular in Eastern markets, like Children of the Light. Each of these games is available on app stores beyond the AppStore and the Google Play Store.

“Alternative” is Becoming the New Normal While alternative app stores are already an undeniably valuable monetisation layer, evidence is growing that they may have been unfairly prevented from gaining a more substantial market share.

In 2018 Google’s parent company, Alphabet was fined $5.15 billion for using the Android operating system to shut out rival stores. It has also been accused of incentivising device manufacturers not to compete with Google Play. This has caused alternative stores to have a much harder time reaching Western consumers and attracting the best content. If even half of the lawsuits in courtrooms across markets such as the EU, UK, US, South Korea and Australia result in lawmakers taking action against anti-competitive practices, the app store market will be blown wide open.

This could become a genuine opportunity for global stores to finally monetise some of the markets with the highest spending power, at scale, for the first time. And, with increasingly hard-fought battles over payments infrastructure (e.g. Apple vs Epic Games), alternative app stores are well-placed to differentiate themselves by offering developers and publishers favourable rates to attract the best content to their stores. Or, in the case of Chinese player TapTap, build your profile as a no-commission store — an approach which has already accrued 30 million MAUs in China and another 13.2 million outside it (a fivefold increase during 2021).

It’s important here to provide the caveat that accessing alternative platforms may involve more friction than publishing on the AppStore or Google Play. For example, publishing in China without a local partner such as Tencent can be a challenge in terms of licenses, technical integrations and marketing. But, with the right game content and expert distribution support, the reward is access to hundreds of millions of potential players, lower marketing costs and in many cases a more favourable revenue share than the dominant platforms.

For Western developers in particular, it’s time to take the blinkers off and make taking games global the new normal.