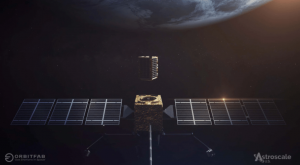 Specifically, it will be for Astroscales’s LEXI (life extensions in-orbit) Servicer operating in geostationary orbit (GEO), which was designed to be refueled in space.

Under the terms of this initial agreement, Orbit Fab’s GEO fuel shuttle will resupply Astroscale’s fleet of LEXI Servicers with up to 1,000 kilograms of Xenon propellant. According to Astroscale, the deal will expand LEXI’s scope and flexibility to perform on- orbit servicing missions. 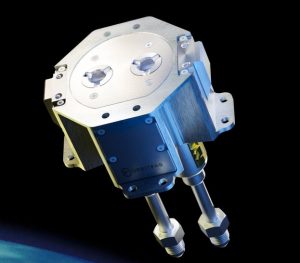 What this means is that Astroscale U.S. is working with Orbit Fab to integrate its Rapidly Attachable Fluid Transfer Interface, or RAFTI (right), into the LEXI Servicer to provide refueling capability, alongside ongoing work to develop LEXI’s rendezvous and docking payload technology.

For its part, Orbit Fab hailed the “take-or-pay contract” as the first of its kind for the space industry.

“This is a historic moment for the space industry, showing the clear and immediate need for on-orbit fueling,” said Orbit Fab CEO Daniel Faber.

“We have partnered with Astroscale to facilitate the growth of the emerging satellite servicing sector by showing clear demand for satellite servicing and the refueling of those servicing assets. This take-or-pay contract is the first of its kind for the space industry. We can monetize a portion of our contracts before we make delivery to our customers, allowing us to quickly build out our network of tankers and shuttles. This is our commitment to Astroscale that we will deliver the fuel for a fixed price, and their commitment to buy that fuel.”

Astroscale’s LEXI spacecraft is due to launch to geostationary orbit by 2026, from where it will perform life extension services for commercial operators and governments around the world.

Orbit Fab’s first two fuel shuttles will be commissioned in low Earth orbitin 2023 and it expects to deploy “dozens” of fuel tankers and shuttles in the next 5 to 10 years, it says, positioning them in proximity to customer satellite constellations in low Earth orbit (LEO), GEO and cislunar space. It declares its intent to “break the single-use satellite paradigm”.

Looking further ahead, the companies say they are exploring opportunities to expand the on-orbit servicing market, including transferring fuel from tankers directly to operational satellites.