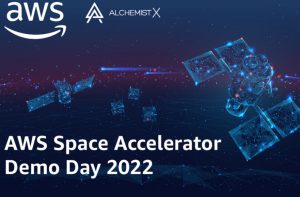 The finalists, it says, range from those seeking to draw insights from the depths of the ocean floor to examinations of the surface of the moon. Mission areas include Earth observation (EO), space situational awareness, launch and propulsion, and space exploration.

The selected companies span the United States, Asia, and Europe and include Magdrive, which is based in Oxford and has been funded by the UK Space Agency. It specialises in power propulsion systems for small spacecraft, such as would fit inside a single 1U cubesat with a dry mass of 1kg, and it plans to launch its first prototype this year. 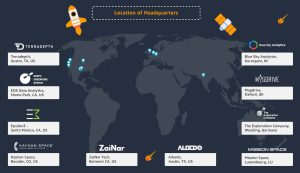 The companies were selected from hundreds of applications by a panel from AWS and AlchemistX, a San Francisco-based venture-capital backed accelerator. Last year, it was organised in collaboration with London-based Seraphim Capital (which has its own space accelerator programme), an investment group specialising in the space industry.

The ten chosen startups are, as follows (chronologically), described in AWS’s own words:

Albedo – Albedo is building low-orbit satellites that capture both visible and thermal imagery at the highest resolution commercially available (10cm visible and 2m thermal). With image quality levels equivalent to today’s aerial imagery, Albedo’s data is a key input for industries such as mapping, insurance, agriculture, and climate applications.

Blue Sky Analytics – Founded in India and based in the Netherlands, this climate-tech startup is using satellite-derived climate intelligence to power financial decisions. It will use this accelerator opportunity to gather network support and scale its technological infrastructure to forge partnerships across sectors and geographies.

Epsilon3 – Based in Los Angeles, this company specializes in software for managing complex aerospace operations and procedures, from test and design through major operations. Epsilon3 will use this accelerator opportunity to focus on enhancing its space mission planning and operations platform.

Magdrive – Based in Oxford, UK, this company is developing next- generation electric propulsion solutions for spacecraft and satellites in low Earth orbit (LEO). The team plans to launch its first prototype later this year.

Mission Space –Based in Luxembourg, this company is focused on providing highly accurate space weather radiation intelligence using a combination of data sources and own detectors launched on to LEO.

ZaiNar Tech – Based in California, ZaiNar specializes in positioning, navigation, and timing solutions as an alternative to traditional GPS. ZaiNar has developed patented digital signal processing techniques to locate radio devices in 3D with meter-level accuracy.

A four-week programme will begin in June, with mentors and subject matter experts from AWS and AlchemistX collaborating with each startup.

The culmination of the program will be the 2022 AWS Space Accelerator Demo Day, where the startups will showcase their technology in a virtual event. You can register to attend here.